For one, the devices’ rubber construction meant the devices were prone to breakage. “They do wear out over time, they can be punctured, and they can fail while the system is full of water, which means water can spill onto the floor,” Fitzroy explains.

There was also the worry of user error. “If the technician was new or still learning how to use the testing products, they could inflate them too much and the rubber would burst,” he says.

Another pain point was the need to fill drainage systems from pipe openings. Technicians had to carry water hoses up stairways or ladders to fill from the highest floor completed. Multiple floors could be tested at once, but if a leak was detected, the entire system had to be drained so repairs could be made, then the entire system re-filled and re-tested.

Upgrading from Test Balls to TestRite 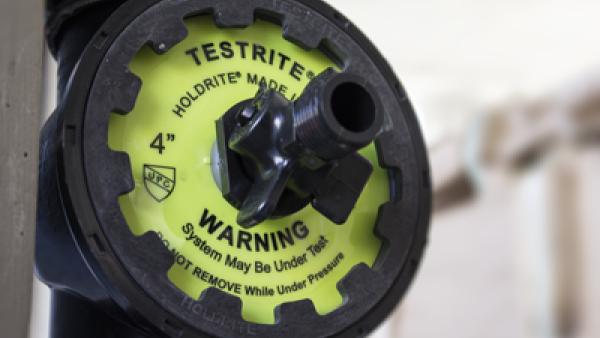 These days, Fitzroy and his technicians have streamlined the DWV testing process significantly with a new testing system, TestRite®, which fills piping systems via a hose connection at the point of the test. This means structures can be filled and tested floor by floor, up to a maximum 50 feet of head pressure or as many as five floors.

The company heard about TestRite three years ago, when Southwest’s HoldRite rep suggested that the new system is a safer, dryer and more efficient way to do DWV tests.

Having used the system for a few years now, Fitzroy wonders how they got by without it.

“Tests and re-tests are a lot faster now,” he says. “We don’t have to lug the hoses up and down stairs anymore, and we’re able to partially drain and refill the system right from the Test Wedge, which we couldn’t do before.” That means technicians can fill floors gradually for testing, drain pipes partially if repairs are needed, then continue filling and testing floor by floor, which saves water as well as time.

Southwest Foreman Supervisor Clinton Watson says TestRite has cut DWV testing time by about a third since making the switch. An added bonus is that drainage pipes now can be capped off before testing. That means there’s less chance of water overflowing during filling, and it helps keep construction debris out of pipes.

Clinton also appreciates the flat design of the TestRite Test Tees, compared to standard test tees with raised plugs. “There’s only one type of cleanout cover needed, so you don’t need to order different types of domed covers, and it just looks nicer.”

Overall, Clinton feels the TestRite system has brought a number of improvements for Southwest: “One, it has helped us to save labor, which means it saves money, and that increases our bottom line,” he says. “Two, it helps us to save time on our projects, which is important to our clients. And third, TestRite has a more professional appearance than the previous system, so it helps us to look more professional in the work that we do.”