Today, plumbers require the best products available to get the job done efficiently and safely. While drain, waste and vent testing, or DWV testing, has been around for decades, traditional DWV systems aren’t up to par. Outdated DWV plumbing fittings and bladders oftentimes put plumbers at risk and slow them down too.

But we’ve created an innovative DWV testing solution at HoldRite that addresses the limitations of outdated methods. Leave dated DWV testing systems behind for something better: TestRite.

As required by plumbing code, new pipe installations must be drain, waste and vent tested to ensure water tightness, and for over 60 years, contractors have used inflatable test balls, or plumbing test balls, to perform this task.

There have been several materials and installation methods for DWV testing over the past 6,000 years. The first system was made of baked clay and used in Babylon around 4,000 BCE. Testing evolved to include wood logs followed by cast iron. Then, in the early 1950s, the inflatable test ball system was introduced. 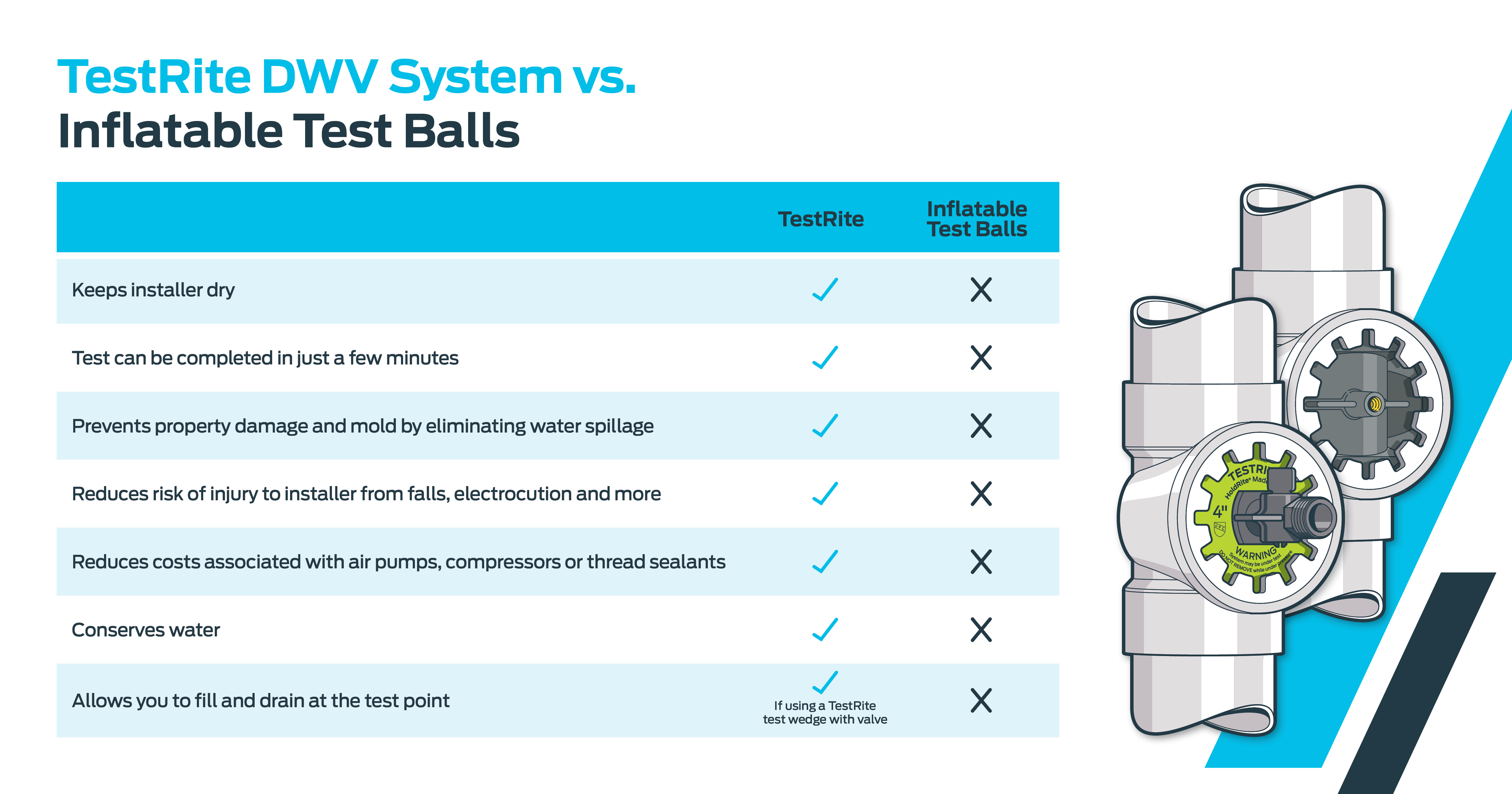 Plumbing Test Balls: What You Need to Know

To use the inflatable plumbing test ball system, you first have to insert and inflate the ball without accidentally rupturing it. Then, add water into the upper piping system until it reaches the upper terminal of the system. After you check for escaping water and call your inspector to get the permit signed off, you deflate the test ball and repeat the whole process multiple times if you’re working on a multi-story building.

Inflatable test balls get the job done — stopping the flow of water so you can test pressure and check for leaks — but they aren’t the most efficient method, nor are they the safest.

While the DWV testing process is tedious to begin with, it gets even more time consuming if there’s a leak. With inflatable test balls there is no way to only let some of the water out to fix the issue. You have to drain all the test water and start over.

They take more time to complete, costing you money every minute you’re not completing another job. Plus, plumbing ball systems require a host of tools, from air pumps to compressors to thread sealants — all of which add up. If the test ball leaks or fails, there’s no way repair it. You must buy a new one. Most contractors say it has a lifespan of about five uses maximum.

One of the most significant facts to note about the traditional plumbing ball testing method is that it can expose contractors to all of the Occupational Safety and Health Administration’s (OSHA) “Fatal Four” top causes of worker fatalities: falls, electrocution, struck by object and caught in/between.

Plumbing test balls often fail during the placement, inflation and removal of the device, whether it’s because of aging equipment, user error or faulty gauges. This could not only put you at risk but also the job site itself. If rupture happens in a multistory building and water spills onto floor, it can travel down to finished floors of the building, causing damage. It can also introduce potential mold.

These issues called for an update of DWV testing methods. At HoldRite, we believe in putting plumbers’ needs first, so we created the TestRite family of products to address the common challenges of working with inflatable test balls.

You can fill or drain water from the test location. No need to empty the whole pipe.

Our TestRite products include anything you would need for a DWV test. Browse test tees, fittings, valves, cleanout plugs, wedge seals, spanner rings or get the entire system for your specific pipe type.

The HoldRite #702 ¾ in. insert clamp, when combined with the use of the HoldRite...
Image

While most people personally believe in lifelong learning, many professionals...
Image

When Should You Use No-Hub Fitting Restraints?

No-hub piping transformed the design of drainage pipes, which for years, had...